Affiliate Summit West 2010 in Vegas was a great event and well worth the 20+ hours it took to travel each way from my home in Singapore. It was great connecting with old friends and make new ones.

Rather than one megapost, I’ll do some Hiro Nakamura style timeshifting and jump between people and places and space it out over a few posts.

Affiliate Summit has a reputation for great parties (in comparison to SEO and blogging and general marketing shows from what I hear).

This year did not disappoint.
-

I got into McCurran Airport just before noon and headed to the Rio, the Affiliate Summit conference venue and where I’d be staying during the trip. I’m not sure if the economy has anything to do with it, but I was able to get into my room immediately, rather than have to wait till 4pm like in previous years.

I headed over to the conference venue and met up with Lori Herren (AKA BajaLori). After helping with the setup for a while, we headed out to have lunch and do some shopping for a cell phone and gifts for my family.

In the evening, I met up with Lori, Keith Plocek (who was on the “Effective Social Media Techniques” panel) and Amanda Orson (better known as Phillian on Twitter and WickedFire).

It was a pity that RUB BBQ had closed and made way for a Vince Neil-branded tattoo parlor. So we headed to the Italian restaurant for dinner. We also lost contact with the other 9 or so affiliates/networks that were supposed to have met us for dinner.

After a quiet dinner where Lori, Amanda and Keith has a good conversation (I was wrestling with opening my phone with 1 hand on account of my bout of tendonitis), I headed over to the Affiliate Summit Charity Poker tournament, organized by DK from PurposeInc and in aid of the summit’s sponsored breast cancer charity. 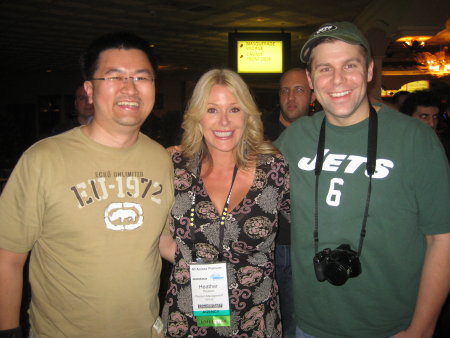 After saying hi to a couple of friends who were taking part in the tournament like Joe Sousa, Scott Jangro and James Seligman, I headed with the PMG team to the iBar for a drink.

Having dealt mainly with Heather over the past 2 years, it was a pleasure meeting her team, Clarissa Cuttrell and Kat Capperelle. I didn’t realize that PMG can help affiliates create content for their sites, so that’s a definite boost to your campaigns.

After hanging out with PMG for a bit, I felt the onset of fatigue and decided to head back to my room. Not before stopping at the poker tournament again though. 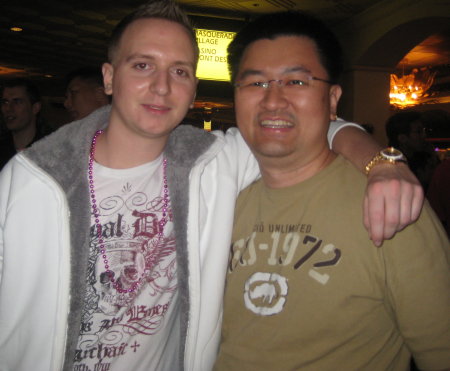 Bryn Youngblut and his flashy watch

The crowd at the poker tournament had grown and with about half the players eliminated, there were lots of affiliates standing around and chatting.

Bryn is a pretty upbeat and happy dude, quite different from how he comes across on the “this network sucks” or “all gurus suck” type posts you read on his blog. 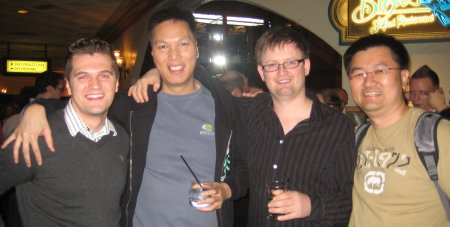 The PoF team was out in force and their self-serving ad system (similar to Facebook Ads) gained a lot of awareness during the summit, especially with their booth at the Meet Market.

What was more interesting though is that John Chow appeared to have had one too many to drink at dinner. According to Market Leverage social media manager Dina Riccobono, he had a flight of tequila at dinner.

I’m glad to say that John is a happy drunk, rather than an angry or aggro drunk, else things would have got out of hand even before the event officially started. 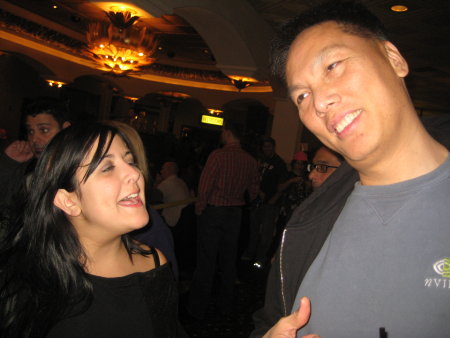 If there was a highlight to the evening’s entertainment, I think John provided it.

so I was off to bed.

Having been stressed by DK the previous evening who mentioned he was doing prep work for his role as moderator for the Killer Facebook Advertising Tactics session, I woke at 1030am and scribbled some notes for the Effective Social Media Techniques session I was to moderate at noon. 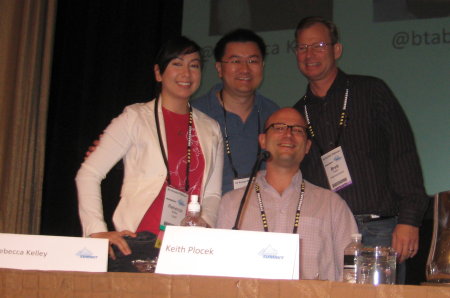 For being the first session during the conference, the turnout was pretty impressive, I think about 3/4 of the room was filled. Together with the sessions panelists 10e20′s social media director Rebecca Kelley, Webmaster World/Pubcon owner Brett Tabke and Mail.com’s social media manager Keith Plocek, the audience was given a rundown of social media best practices, twitter marketing tips and how not to be a social media douchebag.

Shannon from Marketing Elf did a synopsis of our Effective Social Media Techniques session.

[I'll cover more content from the session in the coming days]

With the session over, it was time to relax. This is the second year I’ve presented during the first slot of the conference track. It’s probably the best slot in my opinion because Vegas takes it out of you and losing your voice and sporting bloodshot eyes is not uncommon at the end of a heavy night of parties. Here’s hoping for more first-slot placements in the future!

After the session, I headed with TriFoxMedia’s Josh Todd to Gaylord. Despite it’s name, it’s not nothing to do with gay entertainment (although that would be a good name), and served some delicious Indian food. This being Vegas, we had to eat like there was no tomorrow.

After lunch, we headed to the Meet Market.

Meet Market: This is like a swap meet for affiliates, with merchants, networks and service providers setting up tables. This year there was pretty huge demand for meet market tables, with the event spilling into a second room. What didn’t help was that the rooms were spaced pretty far apart and it was pretty squeezy in there.

The crowd was a little more than I could take, so I headed back to my room for a nap before dinner. 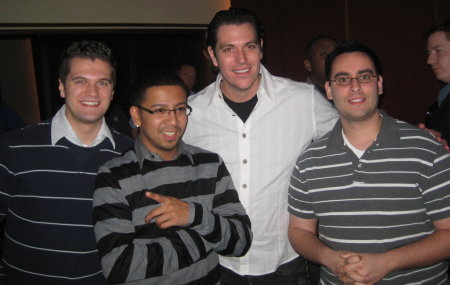 It was a great dinner, meeting the ECM team and other affiliates.

Dinner was pretty phenomenal, although I don’t have any pics, we were too busy eating.

The ribs which had charred tips made up for the loss of RUB BBQ, and the whipped potatoes were interesting – they had the consistency of a thick soup, but tasted pretty amazing.

I was seated with Itay Paz, founder of Israel’s Affilicon and Omri Gonen also from Israel. Kyle Hannah (AKA parrot head from WickedFire) joined us later. So we were 4 guys seated at a table of 6 and food portions were sized for 6 big eaters.

Dessert was great too, with chocolate lava cake, chocolate cheesecake, chocolate malt ice cream, vanilla bean ice cream. Even though we had loosened our belts, we couldn’t finish half of the food. 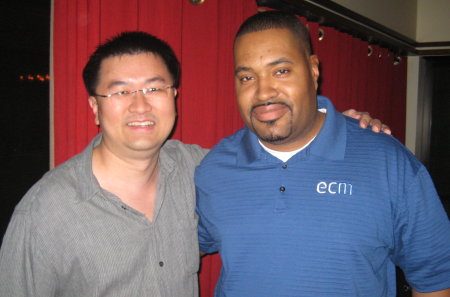 At the dinner too, was Greg Davis, who’s a pretty heavy hitting PPC affiliate.

After dinner, it was time to hit some parties.

Kyle and I headed to the gentlemen’s club the Spearmint Rhino for A4D’s “Dough for Hoes” party. As the strip club doesn’t permit photography, you’ll understand the lack of photos.

I met a number of experienced affiliates, especially media buyers at the Rhino and it was great chatting with A4D’s Jay Kim and Arthur Lee, even with all the distractions.

Close to midnight, we decided to check out the other parties.

The CX Digital party was held at the Palms in one of the suites with a revolving bed and an infinity lap pool. They had painted girls and gogo dancers (one of them performing with an albino python). (pics and vid to come). 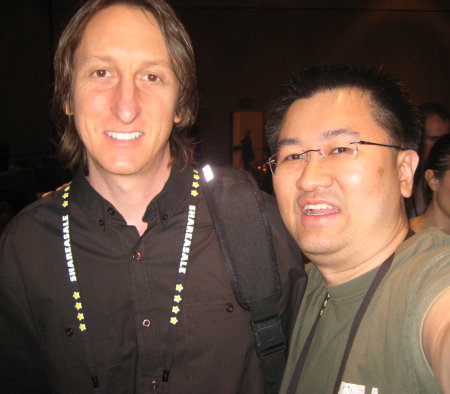 Chad Frederiksen (CDF Networks) about some of his lead generation efforts for local businesses.

Call me weird, but what I liked most about the CX party was the catering. The Palms has this amazing white chocolate cheesecake that they scoop into a martini glass (like ice-cream), which then then proceed to drown in caramel, chocolate sauce, chocolate chips, nuts. I had 3 of those and probably enjoyed them more than all the free booze being handed out.

This had half a basketball court in one half of the suite and had some NBA affiliation. As I’m not really into sports, it didn’t really do anything for me, so we left shortly after.

I also met my buddy Garrett (Indoflipped on WickedFire) whom I’ve chatted with and met in person for the first time. 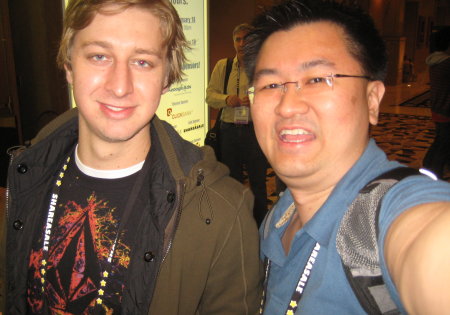 It was way after midnight when we got to the NickyCakes party. On the way in, we saw “Sugarrae” Rae Hoffman, Rebecca Kelley carrying out Streko who had a little too much to drink. I thought it was cool that Rae took time to say hi, even though she was helping to support Streko who was totally out of it.

Although the crowd had thinned out, I had the chance to meet Mr Affbuzz, Justin Barr and Tobey Forsman AKA WF’s Yebot. Just like the typical affiliate meetup, there were 50 guys and one female – AKMG’s Eleah Portillo 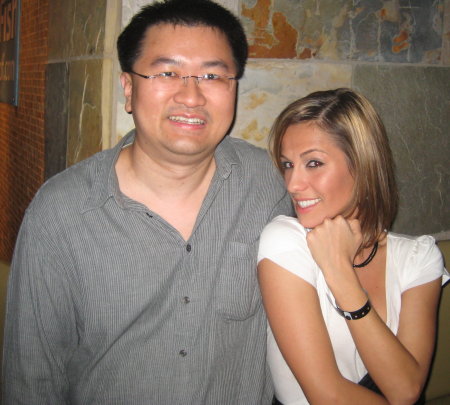 By this time we were tooling around, it was about 2am and I wasn’t sure where Tryst or Club XS was, someone said the Palms. Bad choice. It was actually at the Wynn.

By this time I was feeling wiped out, so I headed back to the Rio to rest.

From what I heard, the Copeac party was pretty good, so next year I’ll plan things a little better.