Continuing on the people and companies I met up with at the recently concluded Affiliate Summit West 2010 in Las Vegas, it was great to have met up with many people, some of whom I’ve known and talked regularly with for 2 years or more over skype and AIM.

Note: If you missed the first part, you can find it here: Affiliate Summit West 2010 in Pics and Words Part 1.

The Ryan Eagle vs Maxbounty drama

As Nickycakes mentions in his post summarizing some of the “drama” at ASW, I stepped into the meet market and heard that Maxbounty has a poster featuring a shady character that looked like Ryan Eagle (owner of the Eagle Web Assets CPA network). I wasn’t aware that the Eagleman was angry or shaking about the picture. I did follow him to the booth to have his picture taken. 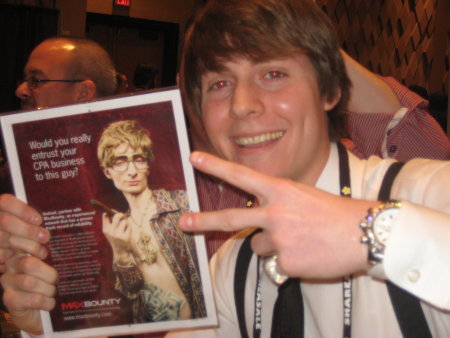 The Birdman with the Maxbounty Ad

As we were taking the picture and Ryan was laughing about it, it was funny to see one of Maxbounty’s owners JP Sauve who was manning the booth and talking to prospects, try to grab the poster from Ryan.

The episode was mildly entertaining.

I also sat in on the SEO Site Review clinic, moderated by Sugarrae, with a panel comprising Michael Gray (Graywolf), Streko and Greg Boser.

I often hear how such panels can be brutal. On the contrary, I thought the SEO experts gave frank, relevant and constructive advice. If you think that’s “brutal”, you probably need to be in a different industry.

Hanging with the TriFoxMedia (TFM) crew

I hung out for most of the summit with the guys from TFM, a boutique CPA network, with owner Josh Todd and senior affiliate manager Boone Riddle. They took good care of me, and we went to a number of the parties together. 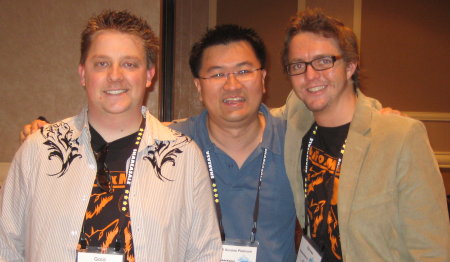 Since we already talk about business regularly over AIM, it didn’t make much sense to talk (much) business in Vegas. So it was pretty much 3 days of partying and our most frequent conversation topic was deciding which party to head too next.

The major takeaway I got from this summit is I should probably RSVP to all the parties I get invites too because:

I saw a couple of douchebag affiliates try to weasel their way into some of the parties. In most cases they were stopped cold at the door, and in other cases, they managed to get in (maybe with the possible threat of projectile vomitting?)

There were a couple of meetups for the members of the WickedFire affiliate marketing forum. I didn’t head to them, though I bumped into several groups of them during the conference.

I bumped into Nickycakes early the morning he won “Affiliate of the Year”. 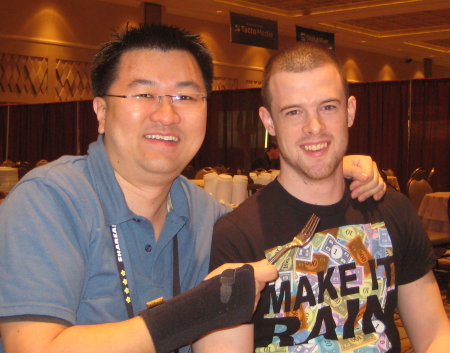 What the fork? Nickycakes makes it rain at the Pinnacle Awards 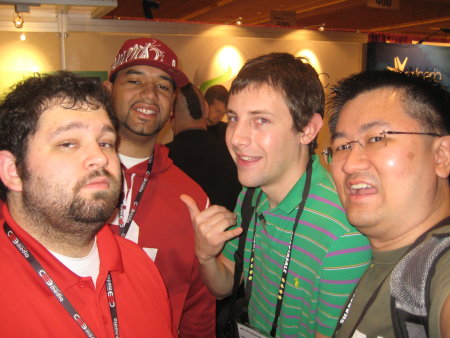 At one point, I saw Bofu2U had a tweet saying he was so bored he might as well “Tweetz his ballz”.

Helping him out, I sent out a tweet saying he needed to “get his ballz tweeted”. Apparently it took on a life of its own, with the typically juvenile members of WickedFire tweeting and retweeting that message to the extent that Bofu2U has other ASW attendees walking up to him and asking about his balls. 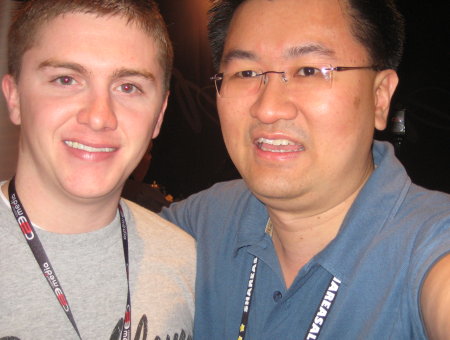 I bumped into Riley Pool in the midst of another WickedFire mob congregating in front of the Convert2Media booth. 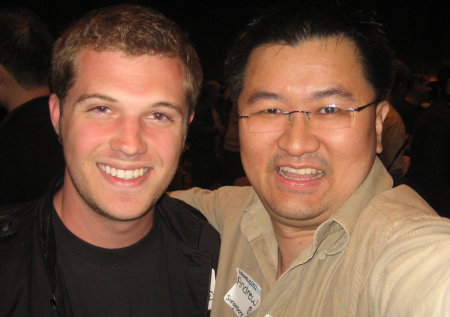 Having spoken to Andrew Payne and having met him at previous affiliate summits, it was good to see him again. I didn’t realize he was the Meetup202 organizer for the Dallas-Fort Worth area. 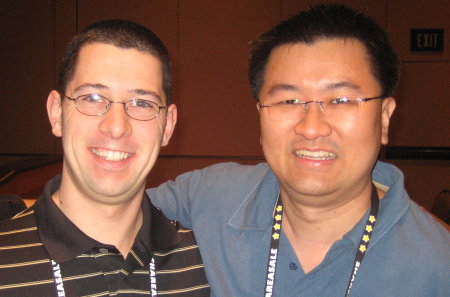 Eric Nagel: I’d briefly spoken to Eric Nagel over AIM a couple of times and his fancy synchronized Christmas lights have got him a fair bit of attention. He’s a friendly and knowledgeable guy and gives some great free scripts on his site. 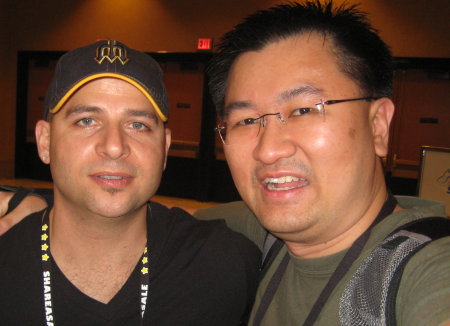 Dylan McDanniel: Dylan is one of the co-founders of Epicenter and has expertise in PPC arbitrage and he and partner Smokey Burns later expanded Epicenter to include CPA offers. He’s a knowledgeable and well-rounded marketer, I had a good meeting with him. 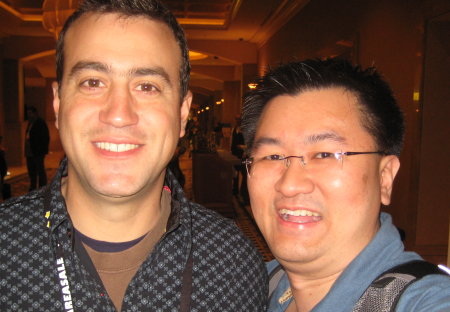 Brian Littleton: Founder of the ShareASale affiliate network, Brian’s one of the most humble, yet knowledgeable people in the industry. I like how they take a proactive stance on many issues facing the industry. Although I didn’t make it to their “Party under the stars” this year, I peeped in early and saw they had like 5 driving simulators and a bunch of other cool stuff at their party. 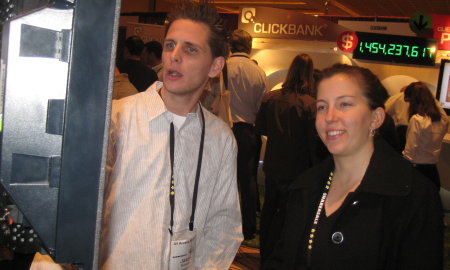 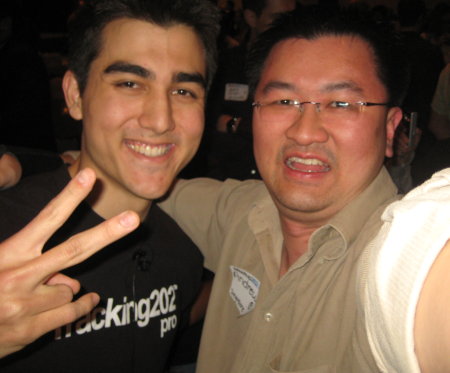 The hard work has paid off for Wes Mahler (above) and Steven Truong, with Meetup202/Revolution202/Prosper202′s acquisition by the Bloosky affiliate network. Wes played a great video showing how they bootstrapped the company in San Franciso. I think one guy had his office in the bathroom. 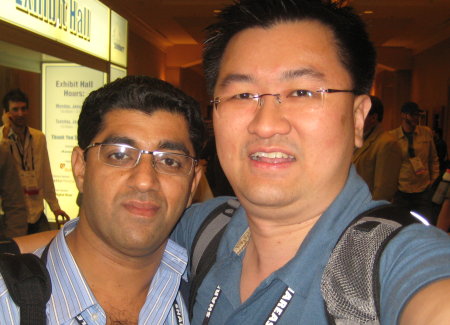 Product datafeed service provider GoldenCan’s Asif Malik: Each year we meet at the summit, we say we’ll contact each other soon after the event. I hope your email’s work, Asif! 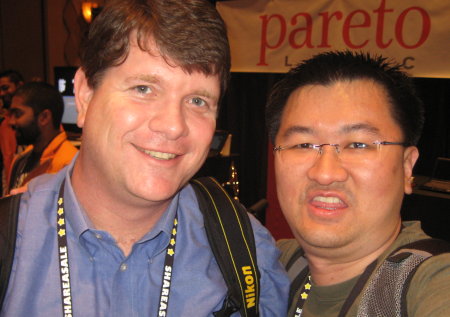 With affiliate marketing consultant and outsourced program manager Greg Hoffman (above) (famous for having sent a box of doughnuts to Kowabunga’s Rachel Honoway to get a gig there). Boutique affiliate management outfits like Greg’s are a key component of the industry and it helps to have someone experienced like Greg at the helm.