In response to an earlier post “3 Blogging Tips from WordPress Guru Gobala Krishnan“, Joe Whyte asked: “I was reading through the secret blog weapon and I was just curious if you know people in america who have had success with this because foriegn search is different then american seo.”

So I thought this would be a good opportunity to review how some of the bloggers have done since launching their blogs. 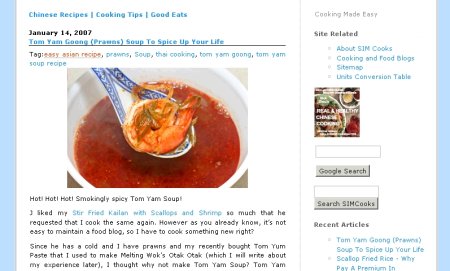 Check out her blog for lots of pretty food pictures and good content too.

In that time, she’s developed quite a following and the search engines like her content too, having raised her blog from a PR0 to PR4 during the recent PageRank update.

SimCooks is Alexa-ranked 299,000, though I’d imagine that her audience profile might not generally install the Alexa toolbar, so her uniques are likely much higher. 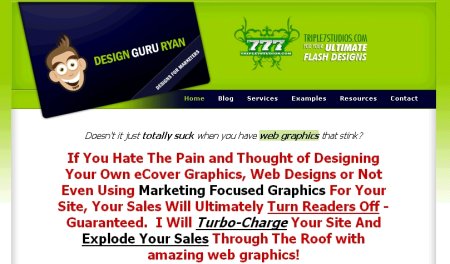 Australia-based designer Ryan Jackson has also been using SBW for about 4 months (SBW had a closed door launch in May 2006). He focuses on web design. 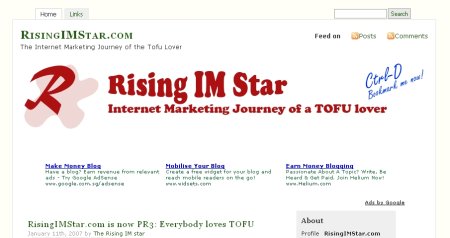 Singapore-based “Tofu Lover” (yes, a weird way to brand yourself) is a new Internet Marketer and focuses on blogging, SEO and traffic generation.

What’s useful about SBW is because it’s a foundational product, it will ground you in the basics of setting up a themed blog, having a plan in place to optimize your keywords and WordPress installation. You also get basic traffic generation tools and plugins.

SBW isn’t intended to cover the flashy technologies which in my opinion just detract from the reader’s interests (and you can already read my blog for newer developments in the blogosphere).

But where its goal is to ground someone who’s been mucking with a blog without much effect, or not got the results they were expecting, SBW delivers the goods.

Back to Joe’s comment “I was just curious if you know people in america who have had success with this because foriegn search is different then american seo.”

SBW is a foundational product, so whether you’re in the US, Europe, Asia or Africa, it’s equally effective.

On another note, I don’t think there’s a major difference between “foreign search” and “american seo”, except for the contextual ads will be geotracked and appropriately served.

Having said that, although I’m Asia-based, have a look at my traffic geo snapshot:

As you can see, the US is responsible for the majority of traffic (roughly about 60%), with Singapore responsible for another 30%. Aside from the other Asian country Malaysia, the top countries include Australia, Canada, the UK, France, and the Netherlands. Hence, outside of the US and Singapore, the geographical profile is fairly diverse.

Only 4% of my traffic originates from the search engines. Not because I’m terrible at search engine optimization (Just about all my pages are indexed), but rather, 96% of my visitors come because I’ve been using social traffic generation strategies.

If you’ve arrive here because of a link in blog comment, a forum post, or from a social networking site, my social traffic strategies are working.

It’ll be an area I’ll be looking at in the next couple of months.

But in the meantime, if you’d like to get a leg up in your blogging efforts, check out SecretBlogWeapon.com.