Having worked in a newspaper paper, I can see the great divide between old line media (aka newspaper, local television) and new media, especially Internet-based ones.

For one, as a content publisher in Singapore,New York, Malaysia or London, can you imagine the rammifications of having readers from Africa, Italy, Germany, Taiwan and Japan?

It’s not something that content owners or bloggers consciously think about. But it does have implications on your online success.

What would it mean to have a loyal cadre of fans in Berlin? Or Austin, Texas? Or Osaka, Japan?

It would not only have an impact on your geographically-diverse community, but it would ultimately affect your bottomline too.

So think about it this way: articles, press releases and blogging are content authority methods 1.0.

Your readership is very much limited to the people in your blogosphere, or the sources that pull content from the article directory. 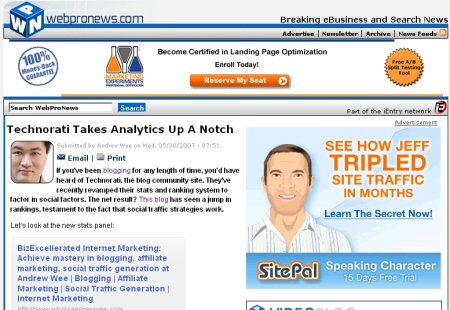 If you use the SEO analogy, you are being given a ‘content backlink’ by a high authority source.

But instead of better PageRank or SERP rankings, you are building up your credibility and reputation.

If you take it a step further, that online authority can be used as a change agent to effect both financial change and social change.

If you use it right.

5 comments on Boost Your Online Authority Through Content Syndication