Deep down most marketers are stats junkies at heart. Even though we realize that your Alexa ranking may not mean a whole lot, especially since a number of Facebook games and applications have muscled their way into the top 50,000, we still look at our Alexa rankings every now and then.

So with micro-blogging platform Twitter providing API (application programming interface) access to developers, it was only a matter of time before a slew of twitter “stats” and “analytics” services made their way onto the market.

Do they really mean anything?

Is it statistically significant?

There’s still a big question mark in that area.

What has happened though is that these services have turned out to be great linkbait, and they seem pretty viral too, with various twitter users announcing/bragging about their “Twitter Elite” status (even if you are the top Twitter dawg in your village of 500….)

The Twittersphere has been abuzz with various users announcing their “Twitter Elite” status.

Are you a member of the elite? Check out the twitter grader and find out.

The service seems simple and harmless enough. Enter your twitter username and hit the “grade” button. 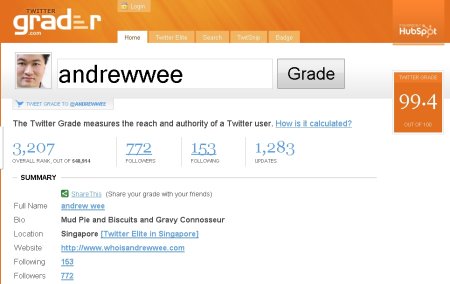 If you’re lucky, it might show something like rank #3,207 out of 548,986 users and you can write some report about “How to dominate the Twitter Elite rankings” and sell it for $10 (Ok, I am kidding here).

You can also click for more detail and see how you stack up in your geographical region: 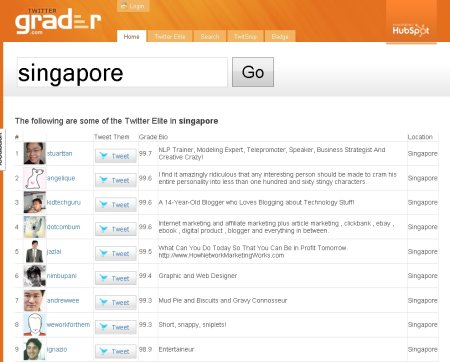 Here’s what I would not do.

I would not make a blog post about how great you are just because some service ranked you as #1.

I would not twitter about how you outrank your friends and colleagues.

I would not get some notion that you’re some type of social media expert, just because you got a high ranking.

Instead, the twitter rankings are a good way to find out other people who’re actively twittering in your area, or in your niche and following them to see if they’re worth networking with.

The score (out of a total possible 100 points) is calculated based on:

It also may not discount out the people who have 3,000 followers, but are following 4,500 others.

Maybe the follower:followee ratio should factor into the ranking alogrithmn, or count for more if it hasn’t already.

Till the ranking is refined, it’s just another fun little toy to play with.