And a screenshot a few END_OF_DOCUMENT_TOKEN_TO_BE_REPLACED

Deep down most marketers are stats junkies at heart. Even though we realize that your Alexa ranking may not mean a whole lot, especially since a number of Facebook games and applications have muscled their way into the top 50,000, we still look at our Alexa rankings every now and then.

So with micro-blogging platform Twitter providing API (application programming interface) access to developers, it was only a matter of time before a slew of twitter “stats” and “analytics” services made their way onto the market.

Do they really mean anything?

Is it statistically significant?

There’s still a big question mark in that area.

What has happened though is that these services have turned out to be great linkbait, and they seem pretty viral too, with various twitter users announcing/bragging about their “Twitter Elite” status (even if you are the top Twitter dawg in your village of 500….)

The Twittersphere has been abuzz with various users announcing their “Twitter Elite” status.

Are you a member of the elite? Check out the twitter grader and find out.

The service seems simple and END_OF_DOCUMENT_TOKEN_TO_BE_REPLACED

As the current situation stands, the rabble rousers sometimes do end up with the most number of twitter followers by virtue of END_OF_DOCUMENT_TOKEN_TO_BE_REPLACED

Is Microblogging all it’s cracked up to be? 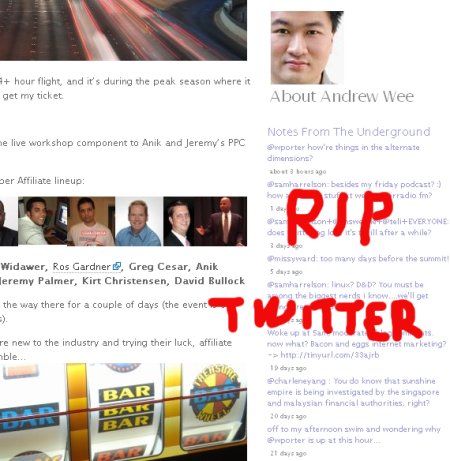 You might’ve noticed that one of the widgets in the sidebar is missing.

Twitter has been an interesting experiment, especially some of the exchanges I’ve had with Sam Harrelson, who’s certainly an intelligent and expressive microblogger.

So what’s my opinion of microblogging?

It’s great if you’re at the sidelines of a seminar or tradeshow and a good way to get updates out. We might see some interesting updates from the Blog Haus at Affiliate Summit.

If you’re waiting in transit at the airport, or on a long subway ride, it’s a good time killer [Although I think you'd get more out of a good book...]

Where microblogging doesn’t work for me, is blogging in the midst of work.

If you disrupt your usual work to file a 140 character update, it can mess up your train of thought.

What’s your experience with microblogging?