Apple founder and CEO Steve Jobs threw down the gauntlet at Apple’s annual Worldwide Developer Conference in San Francisco, announcing the launch of Apple’s Safari browser for Windows. The upcoming Apple vs Microsoft battle promises to be more exciting than Microsoft vs Netscape a couple of years ago. But what does it mean for Internet Marketers? 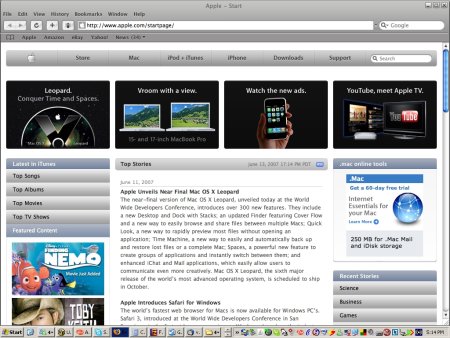 For starters, the Apple browser is pleasantly looking.

In my book, Microsoft Internet Explorer is probably the ugliest browser. Mozilla FireFox is pleasant to work with, although Flock the Social Browser (loaded with Web2.0 functions) remains my favorite (and I’m composing this entry within a Flock window now).

Safari is positioned to be the Apple’s “killer app” with supposed close integration between it’s upcoming pda/phone iPhone, iTunes and Safari in the works. But does Safari really work for Internet Marketers?

Worryingly, Safari has “Private Browsing” which blocks all cookies from being lodged. This means analytics tracking might not be as effective.

Using Safari will mean that I’m surfing “blindly” without my Mozilla-compliant analytics plugins running on FireFox or Flock. I won’t be able to track Google PageRank or Alexa ranking easily.

Safari has a Google Search toolbar built-in, which is helpful.

Strangely, my WordPress control panel didn’t display properly, so even though I’d planned to file a blog entry using Safari, I switched to Flock because the writing panel was “screwed up” and didn’t display correctly.

Safari seems to install quite a number of DLL device drivers, so I’d recommend installing it on a secondary computer. Safari is in it’s Beta, so there could be some unforseen crashes.

Safari could have some potential, but I’ll be sticking to FireFox and Flock for now.