So to break the monotony of Internet Marketers engaging in another game of minesweeper, solitaire, tetris or tagman, there’s a new game in town. Here’s the brief:

The rest of the rules aren’t too exciting. But despite it’s noble intentions, I think this is a thinly disguised way for SEMs to bet on Alexa rankings (‘investment’ learning ambitions aside).

So like any astute gambler investor, I immediately invested all my funds and I’m now officially illiquid.

Here’s where I put my funds: 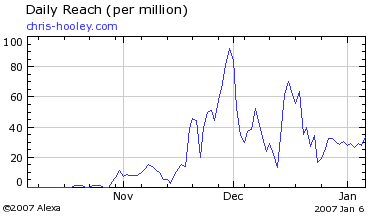 Chris-Hooley.com: I put my money on Chris at $35 a share and bought about $4,500 because he’s a swell guy. And also because his shares are fairly inexpensive. And given his past history, I’d say the prices have a good chance of tripling in value. 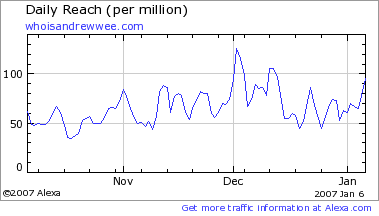 I invested the balance of funds into myself. Although at $95 a share I’m fairly pricey, I think it’s a good investment because as the blog owner, I’d easily be able to hack the system unlock shareholder value.

Left with about $40, I decided to be a nosey parker and snoop around. 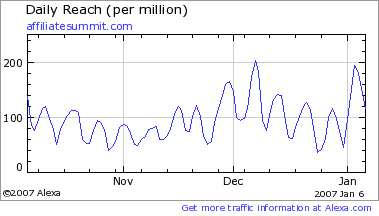 At $135 a share, it seems pricey, though there’s a definite possibility of upside. 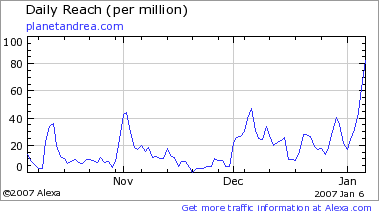 PlanetAndrea has a monster of a spike in her traffic. If I could short the stock I would because although there is a possibility of her price increasing, the odds are for a correction downwards. At $85 a share, they’re a little pricey too. 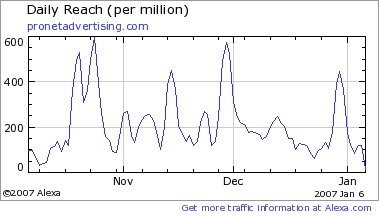 Pronet Advertising: Neil and Cameron’s site seems to have a drop in traffic, but there’s a definite series of peaks and troughs. At $130 a share, there’s lots of upside potential and worth an investment, especially since they look like they’re in a trough at the moment. 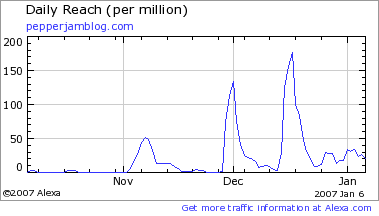 PepperJamBlog: Another nice find here. At $27 a share, Kris Jones is your “go to” guy if you’d like to see a 5-fold return on your investment. The peaks comes with some regularity (about twice a month), so you can sit back and wait for them to come along. 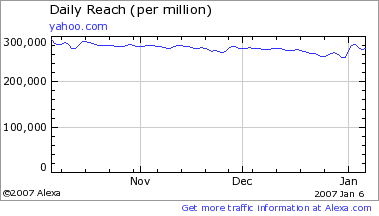 Yahoo: For fun, I checked out the top ranked Alexa site which happens to be Yahoo. At $272,500 per share, I won’t be buying any soon. Maybe one day…

If you’d like to join in the fun, head to: AlexaDex

6 comments on Make A Bajillion Dollars on the AlexaDex