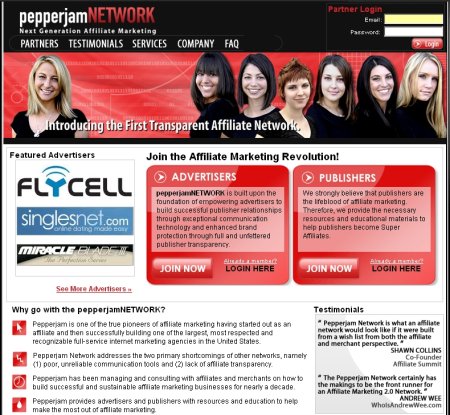 One of the interesting features of PJN is the ability to create a customized widget, known as pepperjamADS. 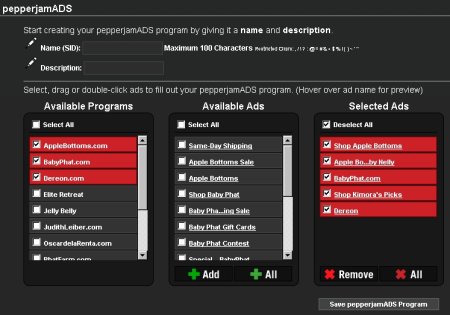 Smarter and more sophisticated affiliates will be able to select and rotate merchants and create a changing widget on their blogs or content sites.

Think of a more user-controlled Google adsense block on your sites, featuring merchants you select. The performance-based nature (pay-per-lead or pay-per-sale) of the payouts means your potential return on investment (ROI) will be at least 10 times higher than what you might expect from a comparable contextual pay-per-click advertising program.

Note: This payout is only going to give you these returns if you spend some time doing appropriate strategic marketing to match appropriate offers to your traffic profile, rather than the “fire-and-forget” nature of Google Adsense, AdBrite, Yahoo Search Marketing or other contextual type ads.

In my eyes, Pepperjam has been really strong in recruiting merchants in the lifestyle/fashion niche, such as fashion lines from Kimora Simmons (of BabyPhat Fashion/America’s Next Top Model fame), Nelly, Beyone’s Dereon and other lines.

If you’re running a mass entertainment/lifestyle website, you’ll have ample tools at your fingertips to monetize effectively.

What I’m interested in looking at will be the included and constantly evolving datafeed capabilites form the merchants. If you’ve worked with XML datafeeds, you’ll know that they’re not the easiest data to work with, unless you’re using a script to process the data, or a service provider like Asif Malik’s GoldenCan.

So it’ll be interesting to see how smart affiliates are going to create shopping and catalog sites from the datafeeds.

Additionally, PJN has an education/resources area, for new affiliates.

This is a great idea and something I had mentioned would be useful to include some time back:

Over time, it’ll be great to see some of the PJ team develop in-house training resources because I think the “software” training materials are probably just as important, if not more important than the “hardware” feed generators, widget code and analytics.

The Bottomline: Having a new affiliate network entrant always means more choice for affiliate marketers, and the test and mettle of the network will be proven as affiliates promote the programs and check that leads and sales are being tracked accurately.

Also with PJN entering the arena, it means that sales going through their system will go past adware detectors, like the ones built into Windows and third party adware software like Spybot and AdAware which have flagged tracking cookies from the major affiliate networks as “potential security threats”.

If you are in a consumer-related niche, eg lifestyle, entertainment, fashion, you’d want to monetize your traffic more effectively with PJN’s merchants as it’s going to give you a higher ROI compared to contextually-targeted advertising systems.

If any, one grouse I have with Pepperjam’s in-house affiliate recruiting system (to recruit sub-affiliates) is that it’s a flat $5 payout per lead, unlike the typical 2% – 4% commission that a number of the other networks are paying out.

Granted it does go up to $7 per signup once you hit a high number of sub-affiliates, but it’ll be nice to have a recurring overriding commission to provide an incentive to groom those you recruit.

19 comments on Is The New Pepperjam Network Right For You?

2 Pingbacks & Trackbacks on Is The New Pepperjam Network Right For You?