I’ve landed in Singapore after a gruelling 17 hour 30 minute non-stop flight from LAX to Singapore (considerably shorter than the 20+ hour flight with a stopover in Tokyo or Hong Kong) and promptly took a 7-hour afternoon nap. I do love working my own hours… 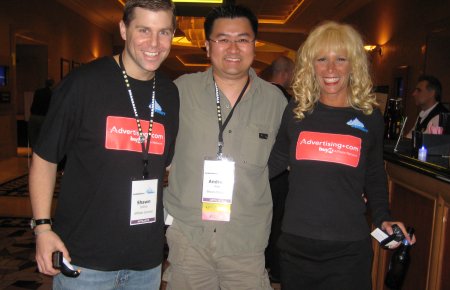 If it was your first Affiliate Summit or you would like to get more out of your trip, here’re my suggestions:

Yes, you can mass mail all the people you met, but social marketing/conversational marketing is what’s going to give you an edge in building relationships and bringing your business to the next level. Include a personal note, talk about winning that $15,000 top prize at the slot machines at 3am, or downing round-after-round of shots at the Ghost Bar. People connect best with those they have a personal connection with.

Here’re 2 things I’ve learned from my consulting to brick-and-mortar companies, 2 things need to stand out and are probably more important than the sale (whether it’s the sale of a product/service or inking of a service/consulting contract). The pre-sales and the post-sales.

Pre-sales might’ve taken place at your Affiliate Summit booth, or over dinner, or at one of the parties. Post-sales means you continue keeping in touch with your customers/partners even after the project has been kicked off or the product has been delivered.

Is it too soon? Too late?

I’d say that you have a 2-week window to drop people a note after the summit. After 2 weeks, it’s difficult to place a reference.

You have a business to run, maybe a day job and a family or significant other to take care of or spend time with. So you need to sort out your business contacts:

Who should you get touch with immediately.

Who should you get in touch with within the next 7 days.

And then there’s everyone else that you follow up with when you have time. Eg. checking your email on your iPhone during the boring bits at a meeting, or while waiting for someone and you’re in a WiFi zone.

Yes, it’s not as cool to keep a diary or notebook (the paper-based variety!) anymore, but let’s face it, you’ll forget 50% of what you learned a week later, and 50% of whatever remains a month from now, and so on. Pretty soon, you’ll forget that you were even at the Affiliate Summit!

I keep multiple text files on my computer, labelled:

and so on. If there’s going to be an invite-only launch for a new product or service, I need to keep track of when it starts, how long it’s running for, and most important my account name and password.

If going to a couple of great parties and meeting “celebrities” was the highlight of ASW for you, you’re sure missing out on a lot of good stuff!

Typically I come home with a list of 10 new things to test out in my existing campaigns, or new product ideas to test out. This past summit was no different.

By “testing out something new”, it has to be more than adding a new widget that someone mentioned during a session or during a conversation, I’d do a benchmark to see what the results are before testing a new strategy, then I’d test the new strategy.

Going one step further, I’d develop 3 more variations of that idea and test those too. It’d be like a mini multi-variate test if you will. And only after enough data has been collected will I continue testing the two best performing strategies out of the bunch of 5 tests.

Going by past experience, I’ve seen modest increases of 10-20% testing new techniques, with the occasional 50% jump in my results. If that doesn’t already pay for the cost of your trip and room and board and entertainment, I’d be hard pressed to find an alternative.

To give you an idea of how important attending live events is to my business, I’m already making plans to attend Affiliate Summit East in Boston from August 10-12 later this year.