Yahoo! MyBlogLog has included a couple of updates since the last time I took a close look at the service.

For one, sorting through “followers” and considering reciprocal “friend adding” is easier because you can filter through the list of friends in a pretty speedy fashion (especially if you have a hundred or more pending followers). 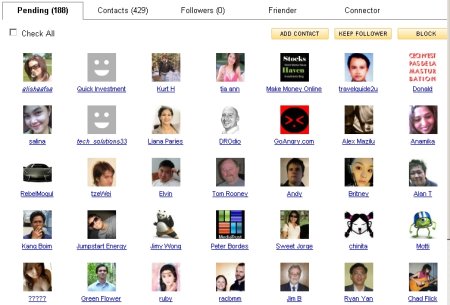 A number of weeks ago, MyBlogLog community manager Miss Tilly mentioned the introducing of a Connector widget.

Twitter continues to be log-jammed, and I think every social network – MySpace, Facebook, MyBlogLog, all go through this phase.

In the case of MySpace, it’s become the hotbed of unmoderated bulletin spam and private message spam for ringtones, free ipod/xbox360/nintendo WII email/zip submit offers. I bet it’s going to take some doing to clear all that muck.

With Facebook, they’re taken the opposite tack of placing a cap on the number of private messages you can send out, limiting the ability of popular group owners to communicate with their members – forcing some to set up off-site bulletin boards to send broadcast messages out.

With MyBlogLog, the platform has a built a good userbase with its blog widget (though guys like Shoemoney had showed that it was pretty easy to abuse the “recent visitors” feature of it). The major sticking point is that Yahoo! doesn’t seem to have a concrete social media strategy (or at least an integrated one in place). I’m still hoping to see some of its community features like it’s Yahoo! Groups, Yahoo! Shopping, Mash social platform and MyBlogLog properties come together. And in my book, come together means more than a single unified Yahoo! login to tie the pieces together.

Even a 1-2 page weekly or bi-weekly updates or “What’s Hawt!” newsletter would serve to bring some of the pieces together…

So what’s the deal with Twitter’s sputtering and throttling down the flow of data? 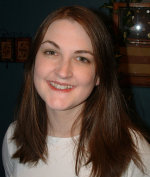