I’ve been invited to speak at a branding and marketing event this Thursday in Singapore organized by the NUS OC (National University of Singapore Overseas Colleges) and supported by the Entrepeneur 27 Singapore chapter.

I’ll be focusing on how startups and SMBs can leverage the power of the internet to generate leads, grow their business and increase revenue and profits.

If you’re in the neighbourhood, check out the event.

If you come for the event, be sure to come up and say hi. 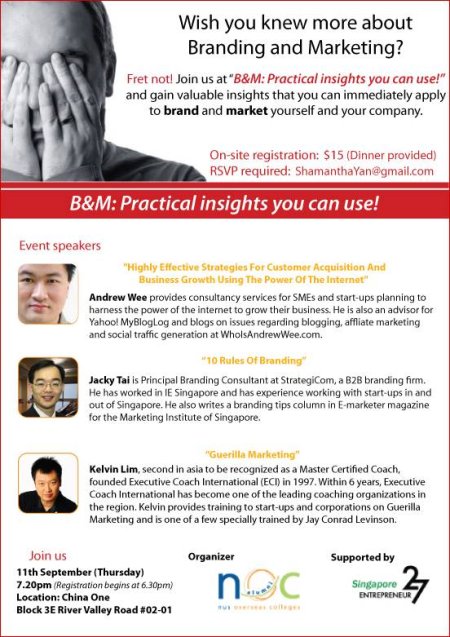 Last month I spoke at the second Singapore Facebook Developers Garage (organized by Entrepreneur 27 Singapore (e27) and the Singapore PHP Users Group) for a session: “Facebook Apps: Goldmine or Hype?”

It was certainly an interesting session, and if you know me, I certainly wouldn’t waste my time if it was “hype”…

More interestingly, I got a chance to meet up with a number of skilled PHP, Ruby-On-Rails and CakePHP programmers and a number of them are pretty skilled developers. Already a number of Singapore-developed applications are making their mark on the social networks, and it’ll be interesting to see what comes up next.

Here’re the presentation slides from the session.

Here’s the video from the session:

Talking to a number of budding entrepreneur’s at last evening’s Singapore Facebook Developers Garage and hearing about their growing pains served as an impetus to get this post out. Some of you whom I met up with at Affiliate Summit would have heard parts of this, but here it is in more detail…

No matter whether you live in Las Vegas, or Vancouver, BC, New York city or Singapore, the questions are the same – How do you grow your business?

I’m going to outline 3 discrete stages that I see business go through, and I’m going to paint some generalizations here. (generalizations refer to 90-95% of the people in each of these categories out there. So hold off on the flames, especially if you’re part of the 5-10% of “distribution curve busters” out there)

With an average of END_OF_DOCUMENT_TOKEN_TO_BE_REPLACED

If you didn’t already know, a number of the hottest Facebook Applications are coming out of END_OF_DOCUMENT_TOKEN_TO_BE_REPLACED