END_OF_DOCUMENT_TOKEN_TO_BE_REPLACED

PlanetAndrea just alerted me to this.

Ok, so you may or may not be socially inept, but the fact is that TickMe can help you expand your network, project a different persona in your profile, or simply generate more traffic for your blog, website, portal.

I’m expecting that Terry from Kineda will be coming over very shortly to set up something. And we could use more pictures of Scarlett Johannson and Japanese Race Queens, can’t we?

TickMe’s interesting because there’s a system in place to protect your ego.

ItÃ¢â‚¬â„¢s a bit like Myspace/Faceparty but with more privacy and a dating slant. ItÃ¢â‚¬â„¢s all very simple. Log in and Ã¢â‚¬Å“tickÃ¢â‚¬Â someone you like the look of. They wonÃ¢â‚¬â„¢t know youÃ¢â‚¬â„¢ve ticked them unless they tick you back and you get a mutual tick! Cut out all the nonsense and be sure that the people youÃ¢â‚¬â„¢re communicating with are on the same wavelength.

That may be true, but if you you look at the profiles: 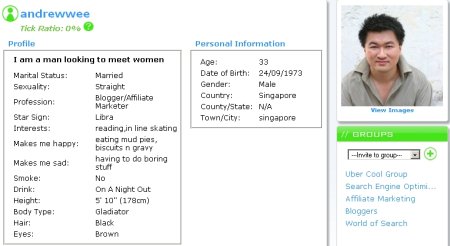 I’m not sure how I feel about END_OF_DOCUMENT_TOKEN_TO_BE_REPLACED