Mark Wielgus, or just “Mark” from 45n5.com (right) is one of those marketers whom you sit up and take notice of.

I found his site when he first launched his eBay-Amazon-Youtube mashup script, which lets you build an affiliate site easily. Mark has already done the API (application programming interface) work for you, so you can skip around the techie aspects and get round to the business of generating affiliate commissions.

He followed that up with his 19pages.com application, which lets you build a niche site easily, and the best thing about it doesn’t require a MySQL connection, so you can transport it from one webhosting account to another easily. If you’re into site development/site flipping, it can be a handy tool to add value to a site (and increase it’s monetization and asking price too).

He’s since gone on to launch his Top100 “make money online” blog rankings (he developed the code) and it’s generated a fair amount of buzz in the internet marketing blogosphere.

So naturally I had to have him on the Friday Podcast to pick his brains about developing software applications to boost your internet marketing efforts and to directly monetize.

We talked about the building blocks of application development, as well as monetizing your application once it’s good to go.

You can hear our thorough discussion (weighing in at more than an hour long) and hear about his latest project ShowYourAdHere.com in the latest edition of the Friday Podcast accessible below:

Incidentially, Mark is also Blog Captain for the upcoming Affiliate Summit and you can hear about the blog room facilities too.

The partial update to visible PageRank that went out a few days ago was primarily regarding PageRank selling and the forward links of sites. So paid links that pass PageRank would affect our opinion of a site.

Going forward, I expect that Google will be looking at additional sites that appear to be buying or selling PageRank.Ã‚Â

This would be a good move to shift more human relevant content into the SERPs, although without visibility of it’s PR algorithmn, it’s difficult to judge how a site providing quality content can justify the provision of free content WITHOUT advertising as a revenue stream.

Has Google’s quality score grown to encompass the quality and sophistication of site content?

Or will it be some time before a comprehensive content ranking system makes it’s way into the PageRank system.

On the bread-and-butter side of things, I END_OF_DOCUMENT_TOKEN_TO_BE_REPLACED 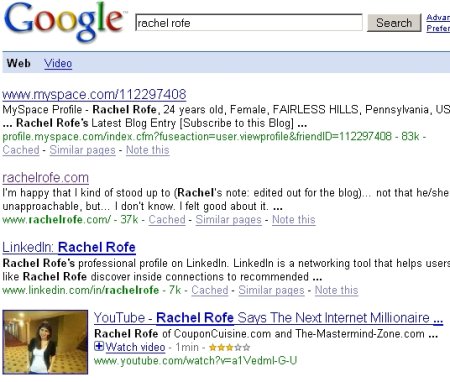 Her video clip shot during the recent JV Alert seminar is a blurb for The Next Internet Milionaire. Yet it comes in as result 4, a little below her MySpace profile, personal blog and LinkedIn profile.

Another search for Internet Marketer Anik Singal, shows a clip from Affiliate Summit 2006 East coming in as result 8 out of 69,300.

This result ranks above his ezinearticles profile page. Pretty amazing.

This episode of the Friday podcast focuses on creating podcast content leveraging on industry trends.

Audio clip: Adobe Flash Player (version 9 or above) is required to play this audio clip. Download the latest version here. You also need to have JavaScript enabled in your browser.

I thought it’d be interesting to see how bloggers ranked, so I END_OF_DOCUMENT_TOKEN_TO_BE_REPLACED

This is an “after the fact update”.

I hadn’t noticed changes on my blog, but some of my content sites have done from PR3 to PR4. Fairly decent consider that they’re a little over 6 months old.

As mentioned in previous PageRank-related posts, take note that Toolbar PageRank is different from your Live PageRank which is registered at the datacenters and determine how frequently your site is indexed by the search engine spiders.

You can find out your Toolbar PageRank by installing the Google Toolbar.

But more effective than the Toolbar PR, which some would say is ‘old PR’ is the live PR, which can be accessed through the Live PR datacenter check.

Backlinks (one way links to your blog or website) determine PageRank.

If you haven’t already, the following are END_OF_DOCUMENT_TOKEN_TO_BE_REPLACED